What Level of Safe Fire Rating is Right for You? 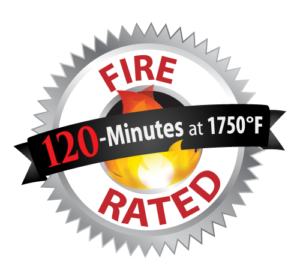 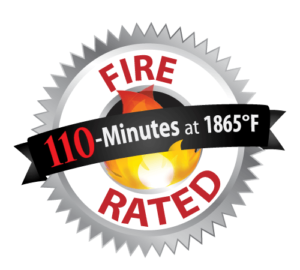 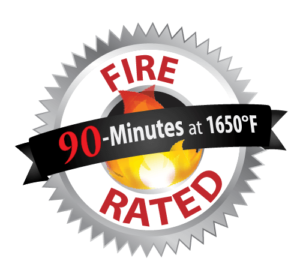 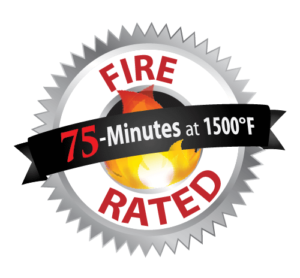 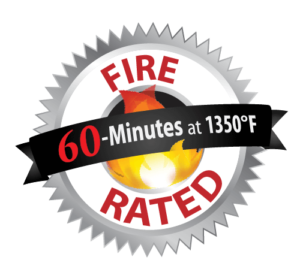 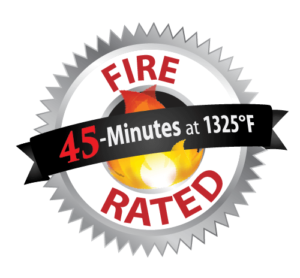 THE PARTICULARS OF A FIRE RESISTANT SAFE

The Quality of the Insulation

While all house safes have some form of insulation, the best insulation for fire resistance is called gypsum. What makes gypsum so special is that, once gypsum reaches a temperature of 262°F, it starts releasing water vapor into the air. Water has a fantastic ability to soak up heat and, because the plaster releases it only at temperatures above water’s boiling point, the vapor will escape before it ever damages your valuables. Several layers of the plaster provide longer safety times and protection from higher temperatures.

Having the Right Seals

Safes can use a surprising variety of seals in order to protect against theft, but many of those seals won’t stand up to the extreme temperatures that a house fire can cause. That’s why we use a special kind of seal called an intumescent (literally, “heat-expanding”) seal. When these seals get exposed to temperatures exceeding 300°F, they can expand up to 10 times their original size in order to keep heat out even when the metal around the seals begins to warp. Our safes often come with double and triple action intumescent seals in order to protect your belongings for over an hour!

The Safe’s Thickness and Rigidity

Extreme heat distorts metal and the longer the metal is exposed, the worse the distortion gets. Residential fires can often get above 1000 °F for an hour or more. That kind of heat can warp thin, light-weight safes in only minutes, destroying your valuables in the process.

The fact is that fire insulation is difficult to apply and can often get in the way of the safe’s inner workings, like its hinges. That leads some manufacturers to leave bare metal or hinge pocket cutouts that can compromise your safe’s ability to withstand high temperatures long enough to protect your property. 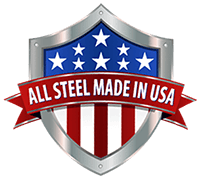 ALL OF OUR FIRE RESISTANT SAFES ARE BUILT WITH AMERICAN-MADE, HIGH STRENGH STEEL

DO YOU NEED FIRE PROTECTION?

Paper begins to char around 405°F. Guns start taking damage at temperature levels above 500°F. To properly safeguard documents and other belongings during a home fire, the internal temperature level of a safe needs to remain at levels below 350 ° F. This is why we guarantee Phoenix ™ Fire Security quality standards to all of our models–so your valuables will be safe from both fire and theft. 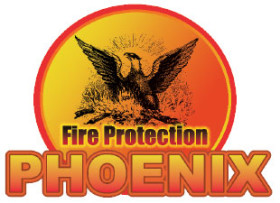 Fire causes a staggering 6 billion plus in property damages annually. In addition, the National Fire Protection Agency NFPA reported that one home structure fire happens every 85 seconds. When looking for a safe, the fire rating is often one of the lowest considerations, but should actually be at the top of your list. It doesn’t make sense to invest in a fire-resistant safe that won’t actually protect your guns or ammo in a fire. Not all safes that claim fire protection are created equal. It’s important to buy a safe that provides adequate protection.  Champion Safes offers real fire protection with UL certification offering protection anywhere from 45 minutes up to two hours. All Champion safes have protection levels that meet the strict UL72 certification requirements. All Champion safes proudly display the UL72 certification sticker to ensure product quality. The Underwriter’s Laboratory standard number 72 is the designated code that is used to indicate a test for the protection of records and documents in the event of a fire. This rating has several sub-classifications depending on the desired internal temperature in the event of a fire. For example, the UL-72 class 350 is set aside for paper products because in the event the temperature rises above 350 degrees, documents may begin to char and information may be destroyed. The UL 72 class 150 is set aside for magnetic tapes, and class 125 is used for flexible discs. In addition to these ratings, a timestamp is also indicated. The timestamp measures the amount of time an item can be exposed to fire while still retaining the desired internal temperature.

You may not have ever given a lot of thought into how your gun safe earned its fire rating. Having a little bit of knowledge about this process can help determine the rating that will fit your needs. In our blog “Understanding Gun Safe Fire Ratings,” we detail why it is important to have a professional ASME facility test the fire ratings of a gun safe versus a “factory certified” safe. If your safe includes a UL seal, like all Champion Safes, you rest assured that each gun safe has passed vigorous testing from a reliable source, the Underwriter’s Laboratory.

Below are the extensive tests performed by the Underwriter’s Laboratory that need to be passed in order to earn this rare rating:

The Underwriter’s Laboratory will put the safe into a 1,700° F furnace for a period of one hour, or a 1850° F furnace for two hours. Once that step is complete, the gun safe is allowed to cool, which can take several days to cool completely. Once the cooling process is complete, the safes are opened and the documents and records are examined to determine if there was undue heat transmission. The inside of the safe is also inspected for heat or humidity damage.

After the fire endurance test, safes undergo another level of testing called the Fire and Impact Test. It follows the basic premise of the Fire Endurance test, but instead of cooling off in the furnace, the safe is removed, raised 30 feet, and then dropped on a pile of broken bricks on a concrete base. This test is designed to imitate a gun safe dropping from the third floor of a burning building in case of a severe fire. As if that is not enough, the safe is then turned upside down and once again reheated to see if it retains its ability to resist fire.

The Explosion Hazard Test is a required test to ensure that the safe will not explode in a rapid heating situation from the buildup of pressure inside the safe or safe walls. This test involves locking the safe and placing it into a furnace that is preheated to 2000° F. The temperature is maintained for 30 minutes unless it is a two-hour test, then it is maintained for 45 minutes. If this test goes off without an explosion, the gun safe is then cooled without opening the furnace doors. Once the safe is cooled completely, it is opened and examined to determine if it is still usable. Locking mechanisms are examined as well as the interior of the safe to determine if it has maintained its integrity.

While there are vigorous testing standards for gun safes to earn UL certification for protection from fire, there is no such thing as a “fireproof” gun safe. Any gun safe that is subject to fire for a long enough at a high temperature will deteriorate at a point. No matter how well a safe is designed and constructed to protect your valuables against fire damage, it will only protect your valuables against fire for a few hours. The term “fire resistant” is the term generally preferred, since it recognizes the fact that all safes constructed to protect against fire damage will merely resist fire damage for a specified period of time

When looking for a safe that will stand up to fire, look for one that can keep the temperature inside the safe down as low as needed for what you keep in the safe and for as long as it would take the fire department to get to it’s location in the event of a fire. Choosing a gun safe that is backed with UL testing is your best bet. Trust the best; trust Champion Safes.

The Crown and Triumph series were tested simultaneously at an ASME certified facility. Four unshielded temperature sensors positioned near the top and bottom of each safe were connected to two separate temperature recorders to verify internal temperatures. The test continued for two hours, heating the steel exteriors to cherry red. Afterward, when examining the burned safes, we found the intense heat had buckled and deformed the safes’ bodies, but the doors remained straight and sealed.

The Trophy, Medalist and Model T series were tested simultaneously at an ASME certified facility. Four unshielded temperature sensors positioned near the top and bottom of each safe were connected to two separate temperature recorders to verify internal temperatures. The test continued for 75 minutes, with furnace temperatures exceeding 1500° F. The results prove that you can’t find better fire protection in an internal-hinge safe.

The Untouchable, Supreme, Master, Regal, Ironside and Superior Super Short series were tested simultaneously at an ASME certified facility. Two pairs of unshielded temperature sensors, one positioned near the top and one placed near the bottom of each safe, were connected to two separate temperature recorders to record internal temperatures. The two-hour test heated our safes’ American-made steel exteriors to a bright cherry red. Afterward, when the safes were carefully examined, we found that, despite looking the worse for the wear, the doors remained straight and functional.